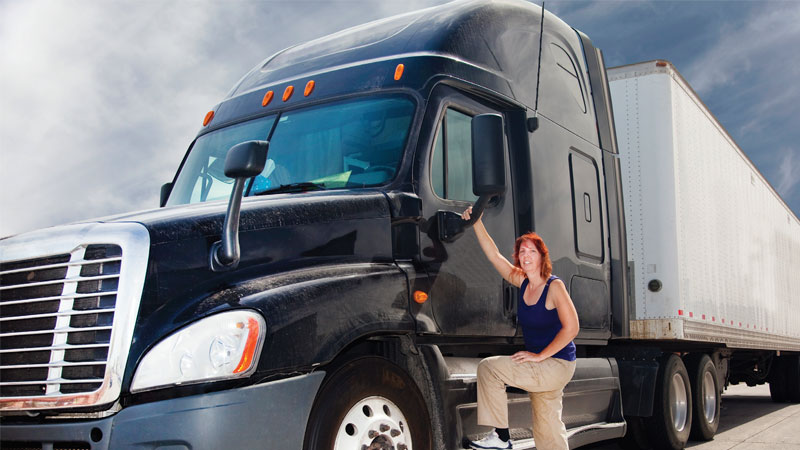 Since The Truck Driver Supply and Demand Gap was published in 2016 by the Canadian Pacific Consulting Services (CPCS), its estimation that the driver supply and demand gap would reach 34,000
drivers by 2024 (and increase from there) has driven the trucking industry to re-evaluate its recruiting and retention strategies.

“It’s not about debating the driver shortage,” Angela Splinter, CEO of TruckingHR Canada, says, “It’s about understanding the shortage.”

In Western Canada Highway News, we have explored several potential demographics over the past few issues – from people immigrating to Canada to become dedicated drivers (Summer 2019) to veterans using their honed skillsets as they pursue post-military life (Fall 2019). This issue, we are looking at a demographic that composes 50% of Canada’s overall population: women.

According to TruckingHR Canada, the percentage of women working in freight transportation is well below the Canadian national average of almost 48% per working field. In fact, women make up
3% of truck drivers; 3% of mechanics, transport trailer technicians, and cargo workers; 11% of managerial staff; 25% of freight claims and safety/loss prevention specialists; 18% of dispatchers; and 13%
of parts technicians.

However, in 2018, Canadian women 15 years and older represented nearly half  (47.7%) of the labour force, compared to 37.1% in 1976, according to Catalyst, a global non-profit with a focus on bettering workforces for women. This is a percentage increase of close to 30%. Women are working, so why are they not working in the trucking industry?

This, it seems, can be credited to the perception of the field. 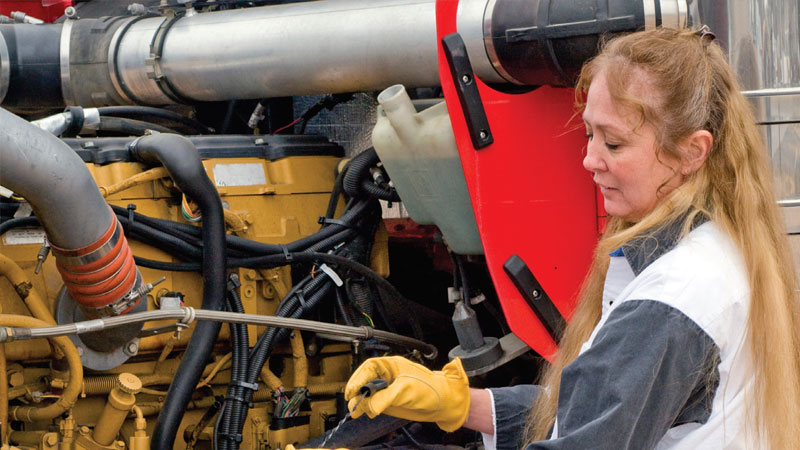 In TruckingHR Canada’s 2019 Millenials Have Drive 2 report, findings indicated that recruiting women in the millennial age group has proven problematic in the face of perceptions of the industry.
The report stated that perceptions of safety and well being on the road are important. Only 29% of women see long-haul trucking as safe, compared to 46% of men. It’s not road safety and the potential for mechanical breakdowns that concern women. Instead, women’s concerns focus on their personal safety if they were to find themselves isolated or alone with strangers, and that they would be intimidated in an industry that they perceive to be a ‘boy’s club’.”

“For too long, there has been a stereotypical face to industry,” says Chris Nash, President of the Alberta Motor Transportation Association (AMTA), “and we continue to work to change that. Commercial transport offers several opportunities as a career for anyone, and not only as drivers, but as dispatch, administration, safety roles, management, and more.”

“What we are seeing are work environments not built to include women, oriented around male culture,” says Susan Ewart, Executive Director of the Saskatchewan Trucking Alliance (STA), “which results in poor HR policies and overall work environments.”

She adds, “Safety and hygiene are also a concern, with poor rest stop infrastructure and the lack of facilities.”

These are not overlooked issues. Chris Nash states that the AMTA and other organizations are advocating for better infrastructure. “This includes a fair amount of safe rest areas, including restrooms.”He says, “With proper infrastructure and facilities on our roadways, drivers feel safer in their journeys and safety is of the utmost importance.”

There are groups working on initiatives all across Canada to push the meager 3% statistic toward the national workforce average of 48%. These groups include TruckingHR Canada, the Women’s Trucking Federation of Canada, THRSC Atlantic, YWCA, and Women Building Futures.

“Through industry image campaigns aimed at re-framing what it means to work in trucking to recruitment and retention projects aimed at helping employers improve their business environments –  nationally and provincially, initiatives are underway to attract women to trucking,” says Susan Ewart.

One such campaign is called Women with Drive, a TruckingHR Canada initiative that works to ‘raise awareness among women of the various career opportunities in the industry, to raise awareness among employers of recruitment and retention practices to better support the integration of women into the workforce, and to develop practical tools to support connecting women with careers in trucking and freight transportation.’

An effort made by Women with Drive is to use mentorship to help with the retention of women entering the industry. In 2016, TruckingHR Canada launched My Toolbox for Mentoring Women in Canada’s Trucking Industry, in conjunction with Women with Drive. This is meant to engage women and employers and help them gain experience with mentorship that will support women in a range of occupations across the country. There, the toolbox suggests three types of mentorship: online peer networks, local women’s events, and one-on-one mentoring partnerships.

Similarly, the main goal of the Women’s Trucking Federation of Canada is to create a network for women. According to its website, the group aims for camaraderie, drivers helping drivers, pride and passion in what they do, empowerment, and building morale. One of its associated members, THRSC Atlantic, focuses on addressing the human resource needs of the trucking industry. THRSC Atlantic’s model to attract, retain, and advance women in trucking consists of working toward better training and adherence to set standards, providing flexible work schedules and better benefits,  improving working conditions, and having inclusive culture with improved communication. As well, the organization has its own resources for retention, retention, and advancement of women.

On another note, other organizations focus on helping women obtain their Class 1A commercial driver’s license, like the YWCA Changing Gears program. Though only in BC currently, Changing Gears targets unemployed women, or women who have been unemployed in the past five years, and provides them with a free 23-week training program.

“I need to give kudos to Women Building Futures,” says Chris Nash, “for showcasing trades as careers for women with their You Got This campaign. Recent stats shared by Women Building Futures show the previous average program income for four of its latest drivers was $11/hour, and the average income upon first employment after completion of the program was $23.58. That makes a huge difference to the lives of those drivers and their families.”

With the shortage looming, it is clear that new demographics must be targeted to bridge the gap.

Being so early in the process, it is hard to know if targeting this demographic is helping offset the driver shortage – but the results, the ripple effects, caused by the aforementioned groups seem hopeful.

“Though we are not seeing huge increases, we are hearing more from fleets about how they are reaching out to women,” says Angela Splinter, “and that is a win.” 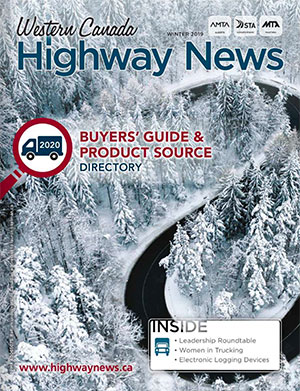