This is a sample module published to the sidebar_top position, using the -sidebar module class suffix. There is also a sidebar_bottom position below the menu.
Login

This is a sample module published to the sidebar_bottom position, using the -sidebar module class suffix. There is also a sidebar_top position below the search.
Advertisers

Click HERE to see the Eskimo Refrigeration ad in the Fall 2017 issue.

Stage one of the introduction of Carrier's next generation of ultra high efficiency, Tier 4 Final compliant units began in March at the dealer meeting in Tucson, Arizona. The dealer body was introduced to the technology behind the new platforms and the exciting performance the innovation offers to customers.

Two weeks later, both customers and the media also had a chance to become acquainted with the new platforms at the Mid America truck show. Following an informative press conference, Carrier provided sales training for dealers attending the show. As the event finally opened, customers were able to "kick the tires" of the new equipment and ask questions of a very knowledgeable and professional Carrier dealer sales staff.
And when customers tried to evaluate their compliance options by visiting the competitor's booth, they were essentially met with a cardboard photo of a white sheet and told to "wait until June".

Throughout April, Carrier conducted a webinar series that provided training on the technology behind the new platforms. These broadcasts were very well attended, and participants were provided presentations they could use to begin to have discussions with their customers.

Now, as we begin the month of June, Carrier is pleased to announce the kick-off of stage two of our platform introduction plan.

Stage two begins with an advertising campaign in June that begins to bring awareness to Carrier's innovative technology behind its trailer platforms. In those ads, and the subsequent micro website it directs customers to, it introduces the idea of EcoFORWARD technologies.

EcoFORWARD technologies are the powerful and innovative components, hardware, software, and other features that offer an array of multiple benefits to a customer's operation. For example, an EcoFORWARD technology such as an electronic expansion valve would offer more cooling capacity, faster pulldown, faster temperature recovery after door openings, and more efficient unit operation. This in turn means better product protection, better asset utilization, and lower fuel use and emissions.

In short: Better for a customer's operation and better for the environment. EcoFORWARD technologies offer more than just merely compliance for the road ahead! 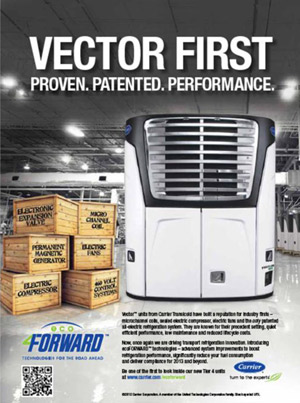 As mentioned, stage two kicks off with an advertising campaign entitled "Vector First". The purpose of the ads is twofold

First, the ad reminds customers that Carrier is really the true innovator in the market. Not only have we set the precedent for "industry firsts" by engineering technology into equipment - such as microchannel condenser coils, electric AC fans, permanent magnet generators and electronic expansion valves to name a few – but we have also now proven their reliability in our product platforms. They deliver performance without the risk.

Second, the ad also reminds customers that regardless of what new units the competitor may try to throw at them, the Vector platform was there first as the industry's only hybrid diesel/electric unit. The reason Vector still remains unique to the industry is that Carrier patented this innovative product concept. Introduced years ago, its unique architecture has proven itself over time to deliver high performance, low fuel and maintenance, and reduced cost of ownership. And while others may try to copy the platform and the benefits the Vector delivers, they will always fall short because of its patented design. Vector First: proven patented performance!

Another new feature of the Vector First advertisement is that it invites customers to "be one of the first to look inside our new Tier 4 units" and directs them to a new micro website that will "go live" at the beginning of the week of June 4th.

Customers have the option of going to two different sites, depending on how they would like to access it. The first option is to scan the QR code with their Smartphone, which takes them to a micro site that is specifically designed for user friendly viewing on their handheld device.

The second option is to access the site via their PC's web browser by typing in www.carrier.com/ecoforward. This will take them to a website (www.truepowerofblue.com) which outlines the technology behind the new tier 4 platforms, whether it be the next generation Vector units or the new platform of belt-driven trailer refrigeration units.

Additionally, the micro site may be used as a sales tool when discussing next generation units with customers. Open the site on a computer or project it on a conference room screen to walk through the new designs!

The first thing a customer accessing the site will be able to do is choose between accessing information about the next generation Vector platform, or the new X4 platform. While the specific models will be revealed at a later date, Carrier has planned to use this new website as the opportunity to begin to introduce customers to the broader platforms.

So whether it be the next generation hybrid diesel/electric Vector platform, or the new belt-driven X4 platform, Carrier has the EcoFORWARD technologies for the road ahead, and to keep your customers' business on the road to success.